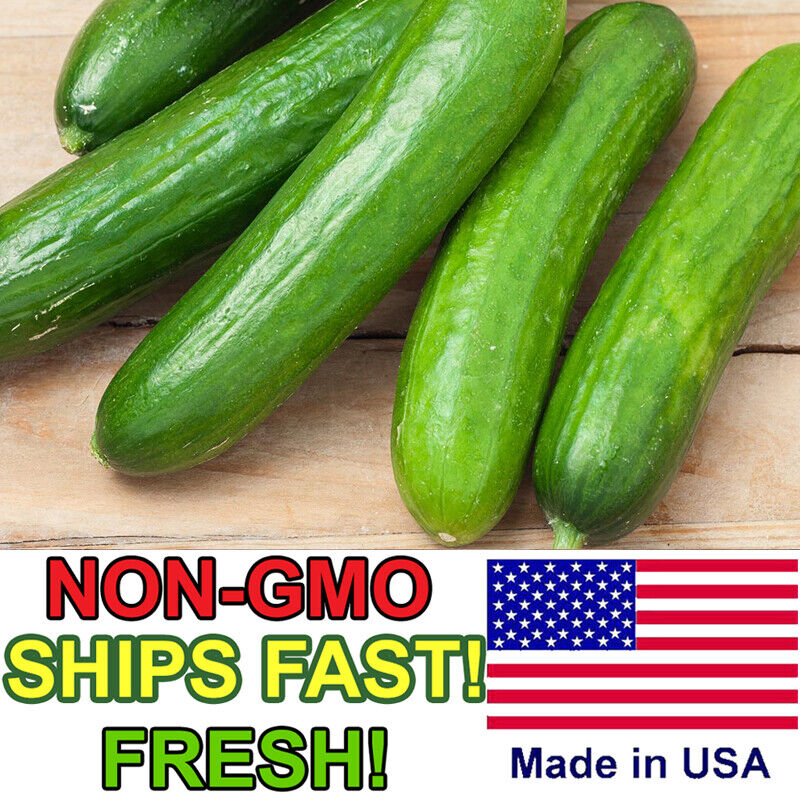 50 Spacemaster Cucumber SeedsNon-GMO | Fresh | High Germination Rate SEEDS GROWN AND HARVESTED IN THE USA! This is a very compact bush variety that is perfect for containers or hanging baskets. The 18" high plants produce 8" long fruits that are resistant to cucumber mosaic virus. You can use the fruit for pickling when small, or for slicing as they get bigger.Historians generally agree that the first cucumbers grew in India's Himalyan Mountains over 3,000 years ago. From this region they expanded into Greece and Rome; the Romans most likely spread this vegetable to the rest of Europe. The cucumber was widely grown by native Americans through the influence of the Spanish and other explorers. Cucumbers continue to be a vital part of traditional cuisine in Russia and many parts of Asia; the greatest variety of colors and shapes of this vegetable can still be found in its Asian birthplace. Spacemaster cucumbers in particular were developed especially as a compact slicing variety by the Agricultural Experiment Station of Geneva, New York. Latin Name: Cucumis sativus Type: Open Pollinated, Heirloom, Warm Season USDA Zones: 3, 4, 5, 6, 7, 8, 9, 10, 11, 12 Seeds per Ounce: 1,000 Planting Method: Direct Sow Sunlight: Full Sun Height: 12 Inches Color: Green Sowing: Spacemaster cucumbers do not take well to transplanting, so either start them early in peat pots or plant them directly. Start them indoors about 2 weeks before frost, placing 3-4 Spacemaster cucumber seeds 1/2" deep in the pot. Keep the air temperature at least 80 degrees F. When two or three leaves appear on each plant, cut off all but the strongest plant with a scissors. Before planting them, "harden" the seedlings by setting them outside during the day. They should be planted no sooner than a week after the last spring frost, when the air temperatures consistently average 65-75 degrees F. For planting them in a hill, place three seedlings or 7-8 seeds in each hill; space hills 4-5' apart. If rows are preferrable, plant seedlings 1' apart or place 5 seeds within 1' and later thin them. Cucumbers love heat and cannot endure even a light frost; if cold temperatures threaten, cover the seedlings. Spacemaster cucumbers produce rather short vines, and perform well as container plants for small spaces. For companion planting benefits, consider planting several radishes with cucumbers - this seems to repel damaging cucumber beetles. However, cucumbers do not like being planted near potatoes or aromatic herbs. Growing: Moisture is the key to growing excellent cucumbers; keep the soil consistently moist. When the vines have developed, apply mulch or straw to conserve moisture and control weeds. Watch out for cucumber beetles, and remove them immediately to prevent damage. Harvesting: These slender, dark green cucumbers work very well for slicing. For best taste, harvest them as soon as they reach a length of 7". If picked consistently all season, the yield will be very high. When the blossom end of the cucumber begins to turn yellow, this indicates that the cucumber has passed its prime. Cucumbers store very well in the refrigerator.